Coming soon to an NHS Mental Health Service near you……

Coming soon to a Mental Health Service near you.

From Campaign to Save Mental Health Services in Norfolk & Suffolk

On the first day of Christmas, NSFT took away… my care co-ordinator

Here is the story ‘Emily’ wanted us to tell:

“Before the cuts, I had four amazing care co-ordinators over ten years. They had the chance to get to know me, both when I was struggling but also when I was well. This meant they could push me to recover, taught me how to laugh and cry and then could keep me safe when I was scared. They have held on to the hope for me in my darkest moments and I have had the time to learn to trust them – seemingly impossible tasks. At times it has seemed they know me better that I know myself and so have helped me build my life.

Now, in the world of the ‘radical redesign’, four care co-ordinators in as many months is the new reality. For others, more terrifyingly, there is no one. No one to take that call when the world is crumbling around you. No one to stop the spiral into chaos.

The perfect present would be the person who will fight your corner with you, values your life and never gives up.”

Campaign to Save Mental Health Services in Norfolk & Suffolk

See  report from local paper below.

As a new campaign is launched against changes to mental health services in the region, the chairman of the NHS Trust which serves Suffolk and Norfolk has denied his organisation is in crisis.

However Gary Page did accept that some of the changes introduced by the Norfolk and Suffolk NHS Foundation Trust had caused unforeseen problems – and were being partially reversed.

Overall, however, it was vital that the Trust changed the way it operated to take account of reduced funding and an increased demand on its services – it is facing a budget reduction of £40 million by 2016.

Mr Page said: “Unlike NHS acute services, our budget is not linked to the number of people demanding our services.

“As a result we are seeing an increased demand for our services at the same time as our budget is being cut. That means we have to look at new ways of providing services.”

He said the Trust had been faced with two options – cut some of its services because of lack of money, or redesigning the way it operates with the aim of maintaining services.

It had chosen the latter, but during the changes fresh issues had become clear.

Mr Page said: “There was a reduction in the number of staff. Much of this was through not replacing those who left.

The number of administrative staff was reduced in particular.

“However that meant that front line clinical and support staff ended up doing more administrative tasks which is not the best use of their talents so we are taking on some more administrators to help there.”

Campaigners have warned that the changes have led to long-term clients of mental health services seeing a reduction in their services – or a change in their support workers.

Condensation dampness – regarded as major public health risk– is said to be increasing, with

An explosion in reports of damp and mould in social housing because tenants on low incomes can no longer afford to switch on their heating has emerged as the latest unwelcome sign of Britain’s cost-of-living crisis.

Social housing maintenance experts say a new condensation damp phenomenon – which was considered a marginal issue for social landlords until a few months ago – is a direct result of increasing poverty and rising energy bills.

Condensation dampness – regarded as a major public health risk because it can exacerbate respiratory diseases such as asthma – has emerged as a particular problem in northern England and rural areas where social housing tenants have been hit worst by welfare reform policies.

No Waving but Angry: Stop the Fire & Rescue Cuts!

The Prime Minister was heckled as he visited flooded properties in the Kent village of Yalding,

where residents say they have had little or no help

Angry flood victims have confronted David Cameron this afternoon, heckling the Prime Minister as he visited a village seriously affected by the Christmas storms.

One woman, named as 49-year-old Erica Oliveras, said her local council had done nothing to help villagers in Yalding, Kent, where homes were severely damaged on Christmas Eve.

And in a heated on-camera exchange with the Prime Minister, the woman said she had been left stranded in her home with no electricity after council workers “went off on their holidays”.

She told Cameron: “We need electric. As I say, the council, from Monday, we have been trying to contact them, but they have all decided to go on their holidays. Nothing.”

She later told The Guardian:  “We had no practical help whatsoever.

When I was asked to help out at a Liverpool food bank by the Trussell Trust and Len McCluskey, I leapt at the chance. But what I saw there really stopped me in my tracks.

The volunteers were working flat out packing food boxes for families who without their help would have nothing to wake up to on Christmas morning.

Then the manager Paul told me this was just one of a number of food banks in and around Liverpool and all of them would be rushed off their feet over Christmas.

In all there are 400 Trussell Trust food banks trying to feed 20,000 kids this Christmas. That’s on top of the 500,000 people they’ve fed since April, which is like feeding the whole of Wembley stadium five and a half times over.

Now Len and I are working class Liverpudlians – born and bred. We know what Scousers are like. Ours is a city full of proud people.

It’s obvious to us that the moment a family was forced to go to a food bank for help would’ve been one of the hardest of their lives – no matter how friendly the volunteers.

So it makes me furious when a prat like Tory Government minister Lord Freud says people are just going to take advantage of a free meal. Rubbish! These families are totally desperate.

#Derbyuk, Public Support for the Firefighters is solid.

the Firefighters is solid. 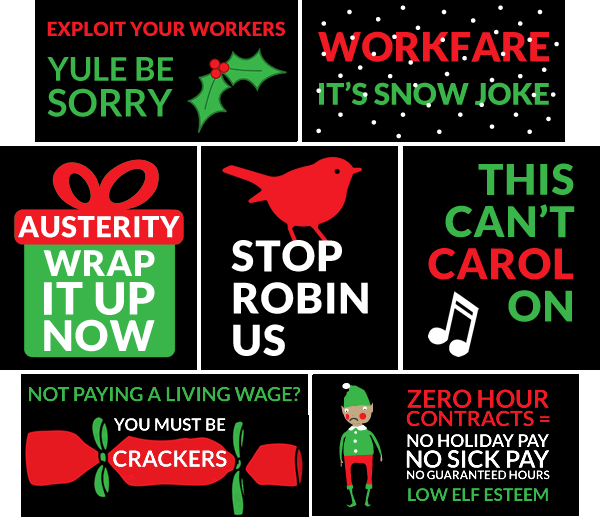 Despair on the frontline of Britain’s homelessness crisis

Advisers at the homeless charity Shelter

are taking 500 calls a day from distraught people

Advisers at Shelter’s national helpline are doing everything they can to make the call-centre office feel like a cheerful environment. Tinsel with Christmas baubles has been hung from the ceiling, tiny silver Christmas trees and felt reindeer have been stuck on the tops of computer screens, cotton-wool icicles are hanging from the windows, and colleagues have brought in mince pies and chocolates to share.

You quickly understand why maintaining a good mood in the office is important if you spend time listening in to the calls that come in, at a rate of around 500 a day, from people facing imminent homelessness or already sleeping rough and seeking advice about how to find somewhere new to live.

The anxiety and emotion that pours into the headsets of crisis advice workers in this crowded fifth-floor Sheffield call centre offers a snapshot of the UK’s worsening homelessness crisis. Advisers at Shelter’s helpline are processing more calls than ever. Last year there was a 15% increase in the volume of calls – a reflection, staff think, of the degree to which people are struggling with rising house prices, soaring rents, cuts to housing benefit and the long shadow of the recession. A day spent at the centre provides a clear picture of the kinds of housing problems people face, as pressure on council house stock intensifies and radical changes to benefit entitlements are introduced.

An employment adviser calls on behalf of a 23-year-old client whom he is trying to help find work – a process that is complicated by the fact that the man, and his young girlfriend, have nowhere to live and are sleeping on the streets. The girlfriend is 18 weeks pregnant and, for reasons that are unclear, her father has thrown her out. Sharon Reeves, one of the helpline advisers, calmly explains the best course of action. “If she is pregnant, they would be in priority need. It sounds like the council has just fobbed them off. They should have provided them with a bed and breakfast to stay in. They should really go back to the council and challenge it,” she tells the man.