Last chance to book seats? by Wed’s 9th May Midday for National Demonstration – A new deal for working people Saturday 12 May 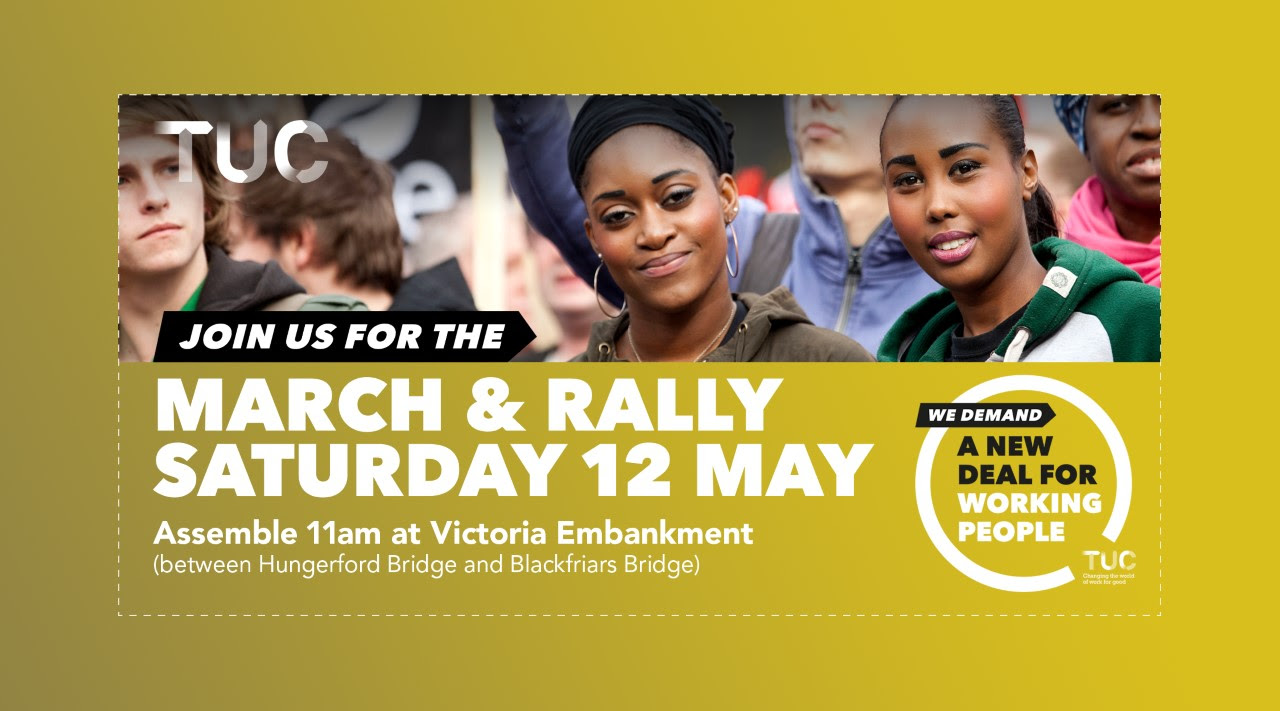 Book as soon as possible with mozgreenshields@gmail.com or text 07889 274723   Last chance to book seats? by Wed’s 9th May Midday

Why are we marching? Because real wages are still lower than before the crash in 2008. Because three million workers are stuck on zero hour contracts, in agency work and in low paid self-employment. Because hardworking public servants haven’t had a proper payrise for eight years. Because our NHS is at breaking point. And because years of cuts have led to poverty, homelessness and despair for too many.

We’re marching for the alternative. For a growing economy with great jobs in every nation and region of the UK. For a £10ph minimum wage and the right to a voice at work. For public services that are brilliant, funded and free at the point of use. And for a society that roots out racism, sexism and discrimination.

Transport has been arraigned from across the country – for more details click here.

Our NHS is 70
Celebrate and Demonstrate Free, for all, forever

The People’s Assembly has teamed up with a huge coalition of unions, campaigns and organisations which will be hosting a massive celebration and national demonstration to mark the 70th anniversary of our NHS this year. On Saturday 30 June in Central London tens of thousands will join a parade of music, protest, carnival and street party. Make sure this is one event you don’t miss out on this year! 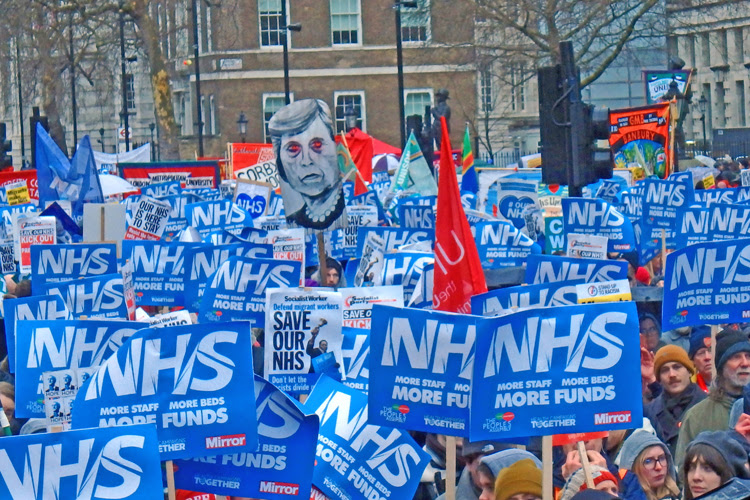 Our NHS is 70
Celebrate and Demonstrate
#OurNHS70 – Free, for all, forever

Say yes to:
– A publicly owned NHS that is free for all
– Proper funding and proper staffing
– Support for our NHS workers
– World class services for every community

#OurNHS is a loved and cherished part of every community. Come out and celebrate with us on 30th June. Bring your family, your friends, your loved ones and anyone who cares about the future of healthcare in this country.

The NHS belongs to us. Access to healthcare is a human right. Our post-war generation created a National Health Service that delivered world class care to all on the basis of need. For 70 years #ourNHS has set a shining example to the world of what can be achieved when we make the choice to look after the collective good.

But #ourNHS is under attack. A decade of austerity, underfunding and top down reforms have stretched our health service to breaking point. Services are being cut and cancelled, hospitals and wards are closing, there are staffing shortages across every part of the system and increasing parts of our health service are being outsourced to private companies.

Never has there been a more urgent time in her 70 year history to stand up and defend what is yours. For what the last generation built. You have paid for it. You deserve it.

Transport being arranged across the Country we will post details soon.

The People’s Assembly Against Austerity
http://www.thepeoplesassembly.org.uk/

Look what the Conservatives have done to the NHS

Happy New Year, welcome to the first newsletter of 2018 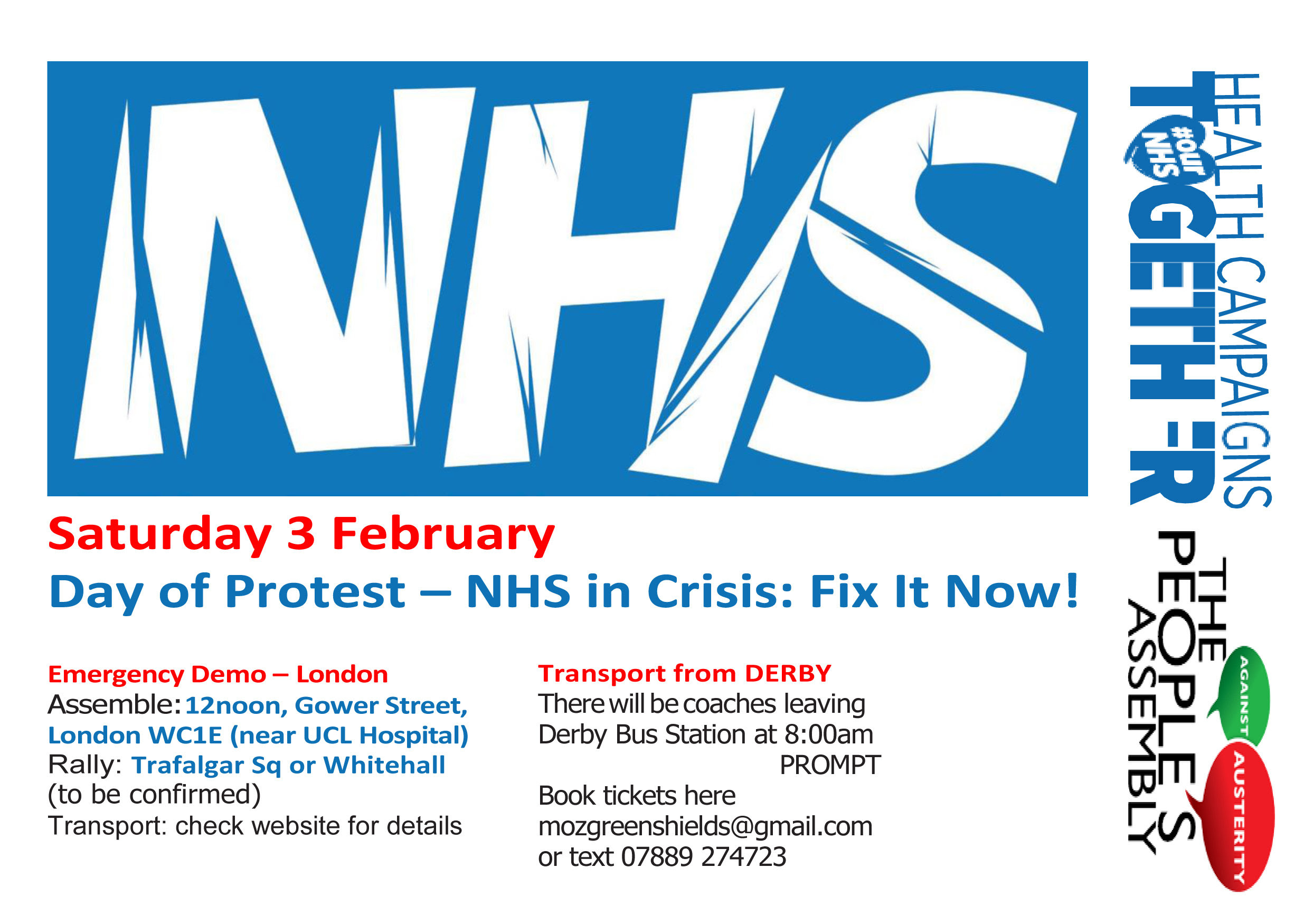 This is in response to the worsening Winter Crisis in the NHS. Jeremy Hunt has been promoted, he should have been sacked in the recent ministerial reshuffle. Read the joint statement from The People’s Assembly & Health Campaigns Together
http://www.thepeoplesassembly.org.uk/hunt_should_be_sacked

Help make this a success

NHS Winter Crisis: Thousands left in ambulances
16,900 people in a week kept in NHS ambulances waiting for hospital care. The highest number of people this winter were forced to wait in back of ambulance during Christmas week in England. http://www.thepeoplesassembly.org.uk/nhs_crisis1

Carillion collapse highlights need for ending privatisation in the NHS
Health campaigners are urging the Government to stop rewarding private sector firms with NHS contracts and restore the health service to a publicly owned and controlled national resource, in the wake of the Carillion debacle. Read more here: http://www.thepeoplesassembly.org.uk/carillion_nhs

300,000 people on low incomes missing out on the benefits they’re due.
The Resolution Foundation said that numbers are “falling through the cracks” in the system and not claiming benefits worth at least £73 a week. Click here for article:
https://www.morningstaronline.co.uk/article/300%2C000-people-on-low-incomes-missing-out-on-the-benefits

Get in touch, we all need to do our bit to help defeat austerity, defend the NHS and begin to invest in people and services. Still a political choice to cut and destroy rather than protect, invest and build for the long term. There are alternatives. 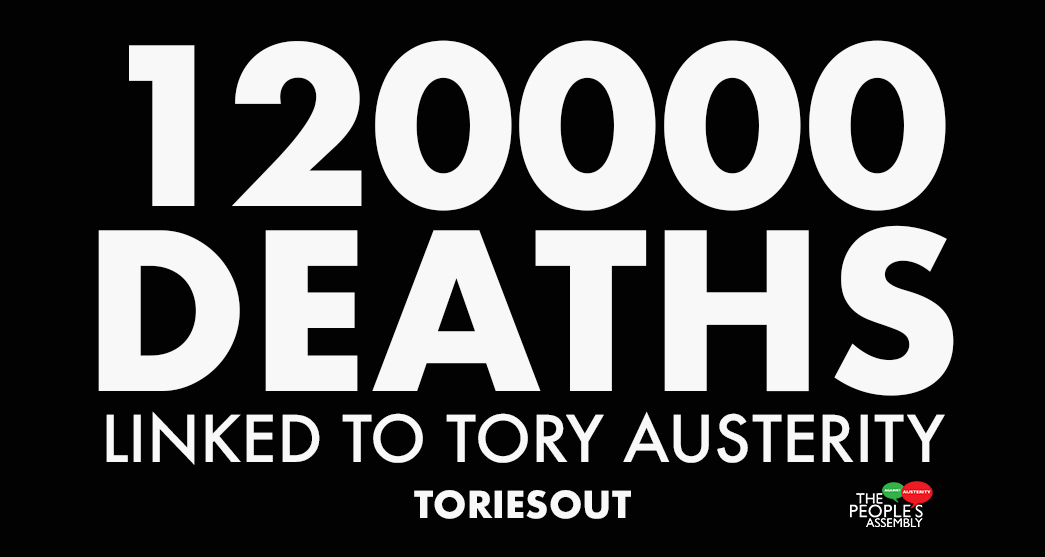 The Conservatives have been accused of “economic murder” for austerity policies which a new study suggests have caused 120,000 deaths. 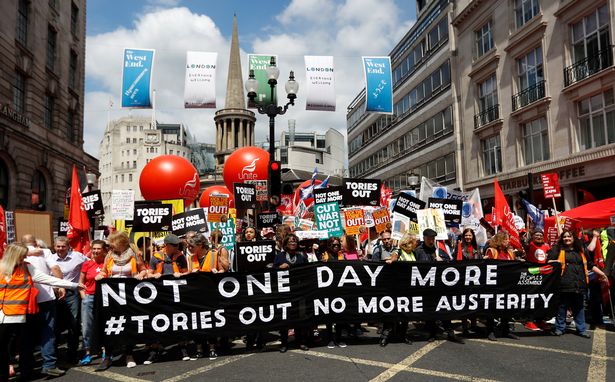 The paper found that there were 45,000 more deaths in the first four years of Tory-led efficiencies than would have been expected if funding had stayed at pre-election levels.

On this trajectory that could rise to nearly 200,000 excess deaths by the end of 2020, even with the extra funding that has been earmarked for public sector services this year. Real terms funding for health and social care fell under the Conservative-led Coalition Government in 2010, and the researchers conclude this “may have produced” the substantial increase in deaths. The paper identified that mortality rates in the UK had declined steadily from 2001 to 2010, but this reversed sharply with the death rate growing again after austerity came in. From this reversal the authors identified that 45,368 extra deaths occurred between 2010 and 2014, than would have been expected, although it stops short of calling them “avoidable”.

The Government began relaxing austerity measures this year announcing the end of its cap on public sector pay rises and announcing an extra £1.3bn for social care in the Spring Budget. Over three years the additional funding for social care is expected to reach £2bn, which Labour leader Jeremy Corbyn said was “patching up a small part of the damage” wrought by £4.6bn cuts. The study, published in BMJ Open today, estimated that to return death rates to their pre-2010 levels spending would need to increase by £25.3bn. The Department of Health said “firm conclusions” cannot be drawn from this work, and independent academics warned the funding figures were “speculative”.

However local councils who have been struggling to fund care with slashed budgets urged the Government to consider the research seriously. Shadow Health Secretary Jonathan Ashworth said the Government must match Labour’s spending pledges in the Autumn Budget.

Per capita public health spending between 2001 and 2010 increased by 3.8 per cent a year, but in the first four years of the Coalition, increases were just 0.41 per cent, researchers from University College London found. In social care the annual budget increase collapsed from 2.20 per cent annually, to a decrease of 1.57 per cent. The researchers found this coincided with death rates which had decreased by around 0.77 per cent a year to 2010, beginning to increase again by 0.87 per cent a year.

And the majority of those were people reliant on social care, the paper says: “This is most likely because social care experienced greater relative spending constraints than healthcare.” It also notes that a drop in nurse numbers may have accounted for 10 per cent of deaths, concluding: “We have found that spending constraints since 2010, especially public expenditure on social care, may have produced a substantial mortality gap in England.”

The papers’ senior author and a researcher at UCL, Dr Ben Maruthappu, said that while the paper “can’t prove cause and effect” it shows an association. And he added this trend is seen elsewhere. “When you look at Portugal and other countries that have gone through austerity measures, they have found that health care provision gets worse and health care outcomes get worse,” he told The Independent. One of his co-author’s, Professor Lawrence King of the Applied Health Research Unit at Cambridge University, said it showed the damage caused by austerity

“It is now very clear that austerity does not promote growth or reduce deficits – it is bad economics, but good class politics,” he said. “This study shows it is also a public health disaster. It is not an exaggeration to call it economic murder.”

The Department of Health stressed that no such conclusion could be drawn. A spokesperson said: “As the researchers themselves note, this study cannot be used to draw any firm conclusions about the cause of excess deaths.

“The NHS is treating more people than ever before and funding is at record levels with an £8bn increase by 2020-21. We’ve also backed adult social care with £2bn investment and have 12,700 more doctors and 10,600 more nurses on our wards since May 2010.”

And independent academics added that it is hard to prove cause and effect with this kind of study even if the underlying assumptions may be correct.

Professor Martin Roland Emeritus Professor of Health Services Research, University of Cambridge said: “This study suggests that a change happened to cause deaths to stop declining around 2014. This is likely to be a correct finding. However, the link to health and social care spending is speculative as observational studies of this type can never prove cause and effect.”

Cllr Izzi Seccombe, chairman of the Local Government Association’s community wellbeing board, said: “We would urge government to review the evidence behind this analysis. If correct, it would clearly reinforce the desperate and urgent need to properly fund social care

Mr Ashworth, responding to the study, said: “This shocking mortality gap is a damning indictment of the dire impact which sustained Tory cuts to our NHS and social care services have had on health outcomes across the nation.

“Ahead of the Budget, this appalling news must serve as an urgent wake up call to the Prime Minister. She must match Labour’s pledge to deliver an extra £6 billion for our NHS across the next financial year to ensure the best possible quality of care is sustained for years to come.”

Get involved with the People’s Assembly today.

Motorcade and Rally to Save Our #NHS  #Matlock Sat 18th November 11.30 Derbyuk #Derbyshire

Motorcade and Rally to Save Our NHS

Matlock Sat 18th November 11.30
Our NHS is in danger. £22 billion has been taken out of the budget in the last seven years and now Derbyshire is to lose 535 beds. This will affect surrounding districts. Who is making the decisions? Council-led Health and Wellbeing Boards play a part, Commissioning Groups decide who gets the limited money made available but never challenge it, and MPs preside over these cuts and changes.
Bolsover Hospital, Matlock Whitworth, Bakewell Newholme, Stockport/High Peak’s Shire Hill, Babington. All for the chop.
WHAT ARE WE GOING TO DO?
Join us on Saturday 18th November, leaving from wherever you are, in colourfully dressed up cars, or just with yourself and your banners. Arrive in the Matlock County Hall Car Park at 11.30

Rally for Our NHS

Indoor Meeting at 12.00. Speakers.
We’ll, to be joined by campaigners from all over the county, plus Sheffield, Burton and Lincoln. We are hoping ITV will be there. Then from 12.00, there will be speakers, discussion, action planning.
We must fight for Our NHS.
contact derbysonhs@gmail.com