If you want to join in our Google group discussion send an email toderbypeoplesassmbly@googlesgroups.com.

PEOPLE’S ASSEMBLY NATIONAL WEEK OF ACTION.  3 TO 7 OCTOBER INCLUDING THE DEMONSTRATION ON 4 OCTOBER 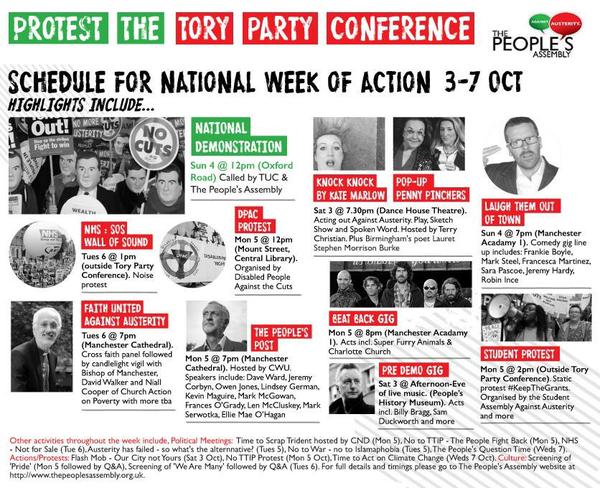 In addition to the national demo on Sunday 4 October, the People’s Assembly is organising a series of anti-austerity actions against the Tory conference in Manchester between 3 and 7 October. These include protests, debates, gigs, films and more.

Cheap accommodation – just £2 a night – will also be available for those who wish to participate.

Further information, including details of accommodation options, can be found on the People’s Assembly website at www.thepeoplesassembly.org.uk/manctimetable.

Derby People’s Assembly will be running buses to the event.  Please see details for booking a seat on the website or facebook discussion page.

INTERNATIONAL DAY OF THE GIRL

This autumn, MPs and peers will discuss the Trade Union Bill which threatens the basic right to strike. For the first time, employers will be able to break strikes by bringing in agency workers. The bill proposes huge restrictions on peaceful picketing and protests. Striking workers will have to tell their employer all their plans – including what they will post on Facebook – two weeks before they strike. The Bill also imposes “ supermajorities”  on strike ballots as well as many other restrictions on trade unionists carrying out their duties to represent members.

Come along to find out more about the threat the Trade Union Bill poses to our right to organise effectively  and join the discussion about how we can mobilise effectively to stop these proposals. 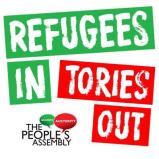 Protest to stop, “Britain First” activists from having a Fascist event in Burton.  The anti Fascist event will take place on October 17 at 12. 30 pm and will assemble at Burton station, on the bridge

IN A RIGHT STATE

Talk about sale of public assets.On October 28 at 0730 pm at the Old Bell Inn on Sadlergate (www.derby50k.co.uk)

AFTER THE ELECTION: HOW DO WE BUILD A SOCIETY THAT WORKS FOR US?

Whoever wins the next election, the problems in Britain’s economy remain. How do we fix the housing crisis, abolish zero hours contracts and reverse the privatisation of the NHS? these questions and more will be addressed in the context of the general election.

Speakers so far include:

Owen Jones, author of ‘Chavs’ and ‘The Establishment’
Frances Ryan, Guardian journalist who writes on austerity
Lisa Mckenzie, author of Getting By, academic and housing activist
Christine Blower, General Secretary of the National Union of Teachers 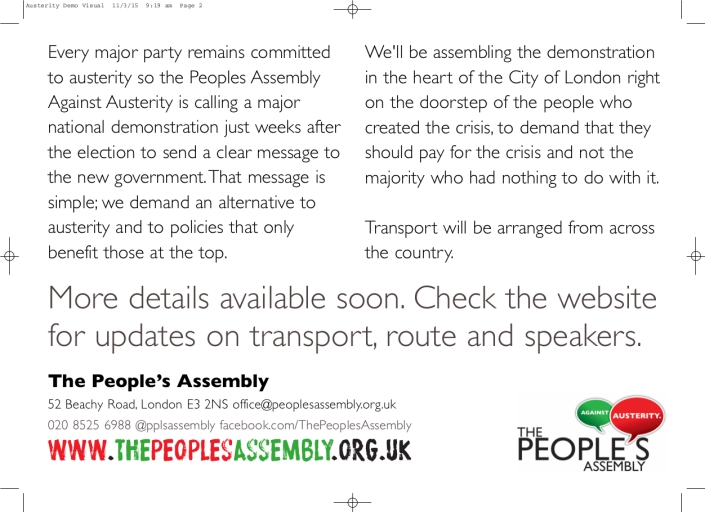 –        11th April – NHS convention day in London (an effort to unite the NHS campaigns, sharpen our focus and raise the profile of our work.

–        25th Silk Mill event – a big event for the Derby locality and an important one to make many links with other campaigners and activists.

Thursday 13th November 7.30A DISCUSSION of Naomi Klein’s new book, “This Changes Everything: Capitalism vs Climate”.St Mary’s Parish Centre, Darley Lane, Derby DE1 3AX
[at one end of the new St Alkmunds Bridge]Naomi argues that capitalism is fundamentally incompatible with protecting the planet and that climate change provides progressive people with a perfect opportunity to restructure the global economy: ending the fetishism of economic growth, tackling inequality, empowering local communities and curbing corporate power.We suggest you read the intro and the conclusion click hereMeeting organised by Derby Events (formerly known as 50k).

– come and support us.

Sainsburys claims to have an ethical policy regarding the products it sells.  Following Israels repeated bombardment  and  killing of thousands of men women and children in Gaza and the illegal settlements on the  West Bank  Sainsburys had refused requests to stop stocking Israeli products.  Derby PSC are asking people to boycott Sainsburys stores in protest.

The local protest is from 11.00 to 1.00 on Saturday 15th November outside Sainsburys Local, Kedleston Road, Derby.

Everyone is welcome to join for all or part of the time.

Supporters of the Peoples Assembly argue that the climate struggle cannot just be left to environmentalists. It is integral to the creation of jobs.

It helps if you book your free tickets here. Also, visit the  Derby Climate Coalition website.

PUBLIC FORUM: “HS2? What do we need for Derby?’

Derby City Council will be giving an update. Guests from political parties, the unions and community organisations are invited to share their thoughts.

Tickets (free but essential) to be booked from http://hs2inderby.eventbrite.co.uk

This site uses Akismet to reduce spam. Learn how your comment data is processed.