#Greece #Austerity and the #Troika: The Trail of the Troika (HD 720p) | A must-see to understand the situation in Greece

What is happening in Europe in the name of the troika? A must-see for anyone who wants to understand the situation in Greece. The European Union and International Monetary Fund have lent more than 400 billion Euros to Greece, Portugal, Ireland and Cyprus to keep these countries solvent. The lenders granted enormous power to the three institutions of the so called troika: the IMF, the European Central Bank and the European Commission. Without any public accountability, the troika is forcing the crisis states to implement policies that are tearing the social fabric of their countries apart. German journalist and best-selling author Harald Schumann travelled to Athens, Lisbon, Dublin, Nicosia, Brussels, Washington, New York and London, in order to find out who has actually benefited from austerity measures. He puts this question to ministers, parliamentarians, economists, bankers, doctors and also to the victims of these policies, the unemployed and the ill. Among the many people we meet are Nobel Prize winner Paul Krugman, IMF Director Paulo Batista and Yanis Varoufakis, the newly elected Greek finance minister. Schumann’s revelations are often devastating and shocking. Given the negotiations currently taking place between the newly elected Greek government and their European partners, this film is of great political and economic relevance.

Want to get even more detail information? You will find all interviews made for this film in full length on “HARALD SCHUMANN ON THE TRAIL”, here on YouTube: https://www.youtube.com/channel/UCoZV…

UK budget: Osborne blowing in the wind by michael roberts

So now we have had the final Conservative-Liberal annual budget before the UK general election in May.  The Chancellor (finance minister) George Osborne waxed ecstatic in parliament that under his tutelage, the UK economy was the fastest growing in the G7 and in Europe and had created more jobs than anywhere else.

He announced a few more ‘goodies’ supposedly for the poorer income earners, namely an increase in the allowance before people start paying income tax.  This would take another 200,000 people out of paying tax by April 2017, but he failed to mention that these non-income tax payers would still be paying social security contributions even when they earning no more than £11,000 ($15,000) a year.  And there were already up to 5 million workers who earn so little that this increase in allowance would gain them nothing.  Indeed, most of the cost to the government budget from the increase will go to richer families with two incomes above the allowance.

The government is now forecasting that the UK economy will grow 2.5% this year and 2.3% each year in the next parliament up to 2020.  On this assumption, the Conservative chancellor has reduced the austerity spending cuts that he previously planned over the next five years.  Even so, the government still plans to cut department services by £13bn and welfare benefits for the poorest and disabled by £12bn.  And richer savers will get a reduction in tax rate on their interest. What the government plans to do is actually increase austerity up to 2018-19, sell another £20bn of public assets (bank shares) next year and then make “the biggest increase in real spending for a decade in 2019-20” – just before the next election!

As the independent Office for Budget Responsibility (OBR) puts it in its budget report
http://cdn.budgetresponsibility.independent.gov.uk/March2015EFO_18-03-webv1.pdf,
“the Government is on track to meet its new fiscal mandate with £16.8 billion to spare. This implies a 65 per cent probability of success given the accuracy of past forecasts. Achieving the mandate with this margin depends heavily on cuts in public spending – particularly on public services and administration – implied by the first two years of the Government’s medium-term spending policy assumption.”

Unemployment fell more quickly than expected as companies kept on labour but stopped any wage rises (and reduced wages and conditions in some cases), increasing employment in part-time, casual and so-called ‘zero hours’ contracts.  So private sector employment eventually went up (public sector employment has been decimated), but real GDP did not so much.  So output per worker fell and then stagnated.  Productivity growth was non-existent throughout George Osborne’s period as chancellor. 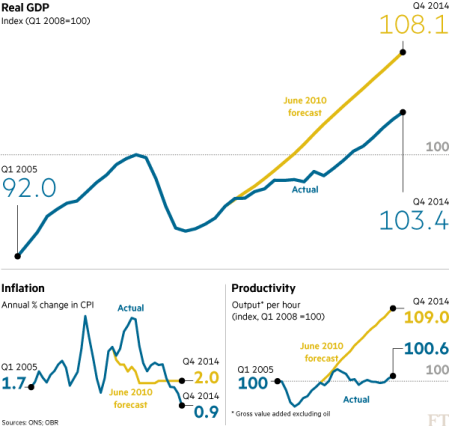 Back in 2010, the government predicted that wages from work would be rising  by 5.4% a year by now.  Currently they are rising by just 1.6% a year.  So average real incomes are still way below their peak back in 2008. 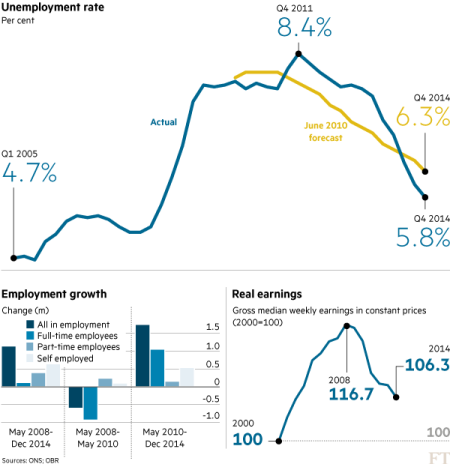 And what of the much vaunted objective of balancing the books for the government by the end of this parliament?  Well, poor economic growth translated into weak wage growth and then into less than expected tax revenues.  So the government had to impose even harsher spending cuts.  But it still failed to reach its target and at least four more years have been added to the period of planned cuts.

Of course, part of the reason the government could not achieve the balance was that it gave huge handouts to big business.  The corporation tax rate will be reduced this year to just 20% (and most corporations do not even pay this rate out of profits because of exemptions and allowances).  Osborne boasted that this was the lowest rate among major economies.  He stated that, as it was private companies that ‘created’ jobs (apparently the public sector has no employees), any hike in corporate tax was a tax on jobs!  In contrast, through VAT and other taxes, the total tax bill for workers still rose £16bn during this parliament. 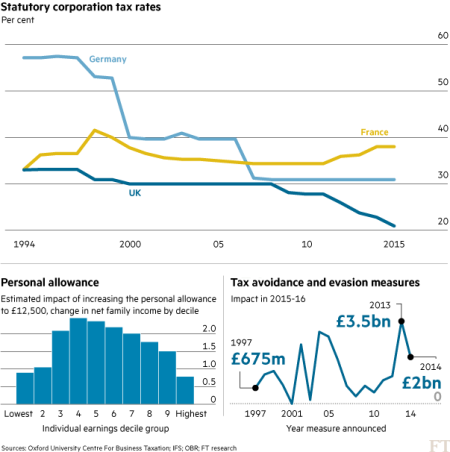 The FT summed it up: “Five years on there are three important facts. First, weaker growth and terrible productivity mean living standards are lower than hoped. The IFS estimates that median household net incomes are nearly 2 per cent lower than they were in 2010. Second, tax and benefit changes have hit the richest and the poorest the hardest, leaving those in the middle least affected. The richest have seen taxes rise and child benefits removed, while state benefits for those on low incomes have not risen with inflation. Over the period, therefore, there has been no significant change in inequality in either income or wealth.” 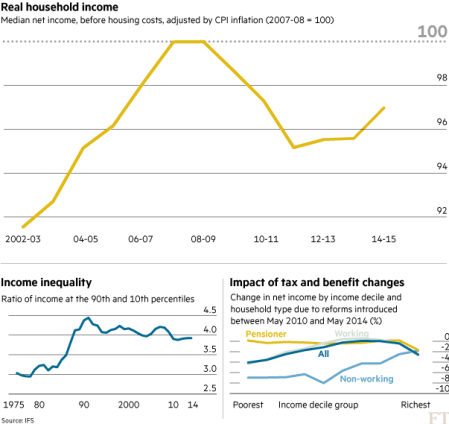 Even that statement about the rich being hit hardest is not correct.  That’s because there has been a huge rise in property prices and the stock market since 2010, assets mainly held by the richer households.  Their wealth has risen sharply under this government while those without homes of their own struggle with rising private rents, disappearing cheaper ‘social housing’ and wages that cannot keep pace with the cost of living.

And at best, that’s the prospect under another Conservative government.  At worst, expect another deep recession throwing all these forecasts to the wind as they were last time.

What Greek politics teaches the Labour party: there is an alternative

What Greek politics teaches the Labour party: there is an alternative

Insisting on Tina, ‘there is no alternative’, brought down the once mighty Pasok. It could do the same in the UK

As I write this, some of the best-paid brains in Europe are puzzling over what happens when the inevitable suddenly becomes impossible.

For the past half-decade, Greece was run by machine politicians who took orders from their northern European creditors and stamped on their own voters – slashing their pensions, selling their national assets and wrecking their economy. The weekend’s elections put an end to that cosy, monstrous system. And so in banks across the continent, analysts handier with statistical probabilities than political unknowns tweak their models. Ministers and pundits look on the tumult in Athens and wonder how to shape it into a glib one-liner.

Amid such febrility, it’s natural to want to pass the first verdict on Syriza – and completely dishonest to do so this early. The coalition of leftists numbers Maoists and Trotskyists, alongside others who sound more like Roy Hattersley. Rather than soundbites and polling, their expertise is typically in Japanese monetary policy or Lacanian philosophy. Tony Blair’s eager young shavers – glued to their BlackBerrys for the next line from HQ – they are not.

But instead of speculating about Syriza’s future, we should draw one vital lesson from its very recent past – one that Ed Miliband and his inner circle ought to learn too. Because there’s no way that Alexis Tsipras would have been sworn in as prime minister had it not been for the disastrous and ultimately suicidal behaviour of Labour’s sister party in Greece, Pasok. The death of the country’s main centre-left organisation has been swift and spectacular.

Harry Leslie Smith, “Hunger, filth, fear and death”: remembering life before the NHS: The #LibDems -#Conservatives are breaking the back of our #NHS

Over 90 years ago, I was born in Barnsley, Yorkshire, to a working-class family. Poverty was as natural to us as great wealth and power were to the aristocracy of that age. Like his father and grandfather before him, my dad, Albert, eked out a meagre existence as a miner, working hundreds of feet below the surface, smashing the rock face with a pickaxe, searching for coal.

Hard work and poor wages didn’t turn my dad into a radical. They did, however, make him an idealist, because he believed that a fair wage, education, trade unions and universal suffrage were the means to a prosperous democracy. He endured brutal working conditions but they never hardened his spirit against his family or his comrades in the pits. Instead, the harsh grind of work made his soul as gentle as a beast of burden that toiled in desolate fields for the profit of others.

My mother, Lillian, however, was made of sterner stuff. She understood that brass, not love, made the world go round. So when a midwife with a love of gin and carbolic soap delivered me safely on a cold winter’s night in February 1923 into my mum’s exhausted arms, I was swaddled in her rough-and-ready love, which toughened my skin with a harsh affection. I was the first son but I had two elder sisters who had already skinned their knees and elbows in the mad fight to stay alive in the days before the social safety network. Later on, our family would include two half-brothers, after my mother was compelled to look for a more secure provider than my dad during the Great Depression.

Cleaning Workers Victims of Police and Austerity in Greece

Cleaning Workers Victims of Police and Austerity in Greece

Some workers remain in hospital as they await final court order